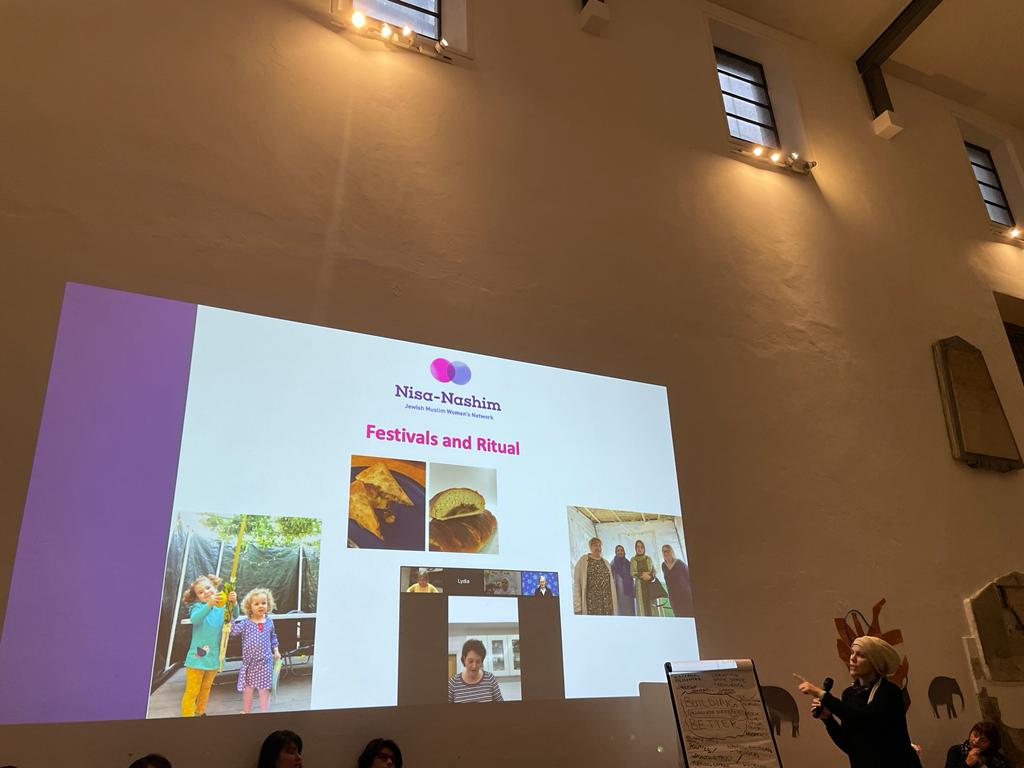 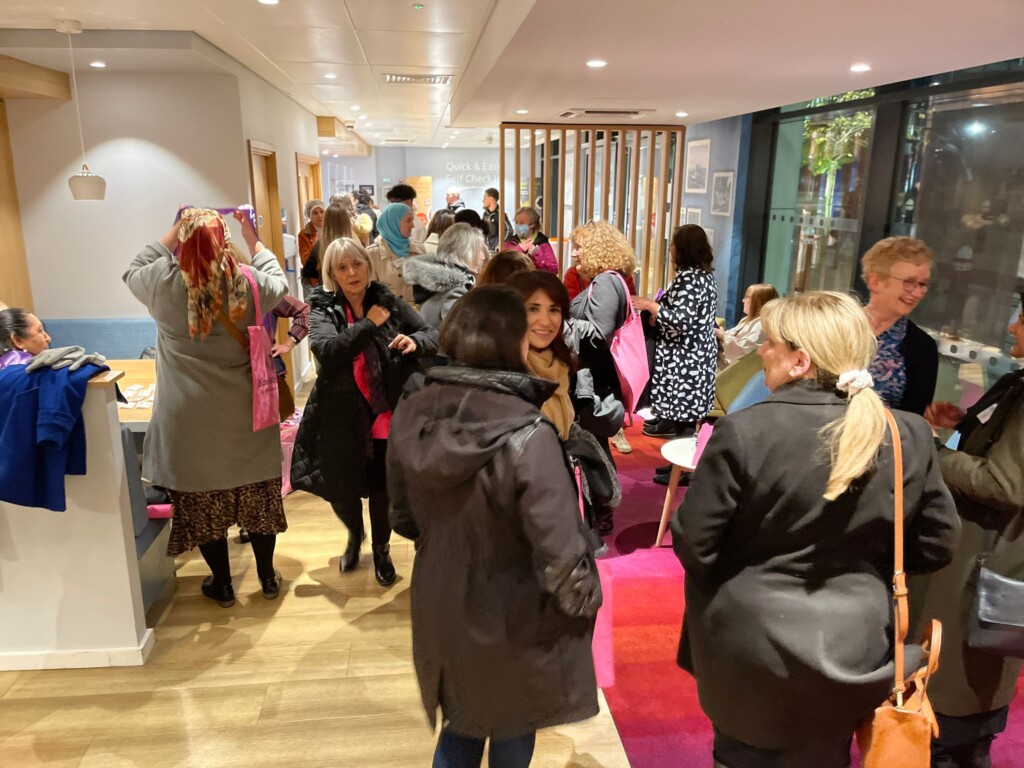 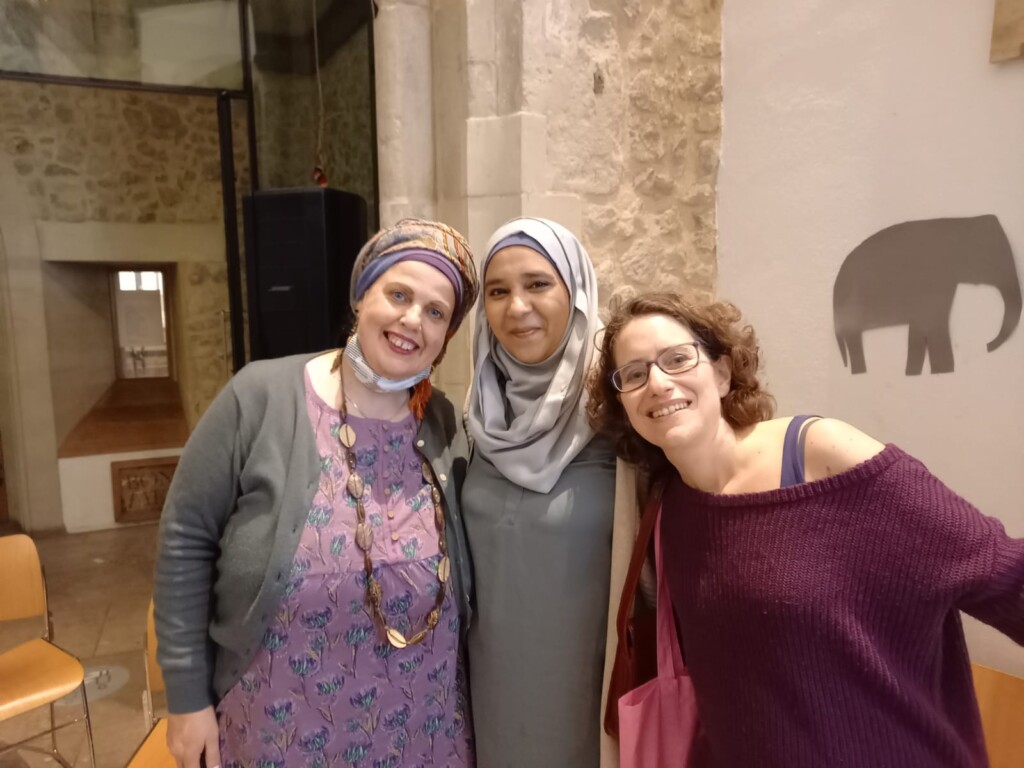 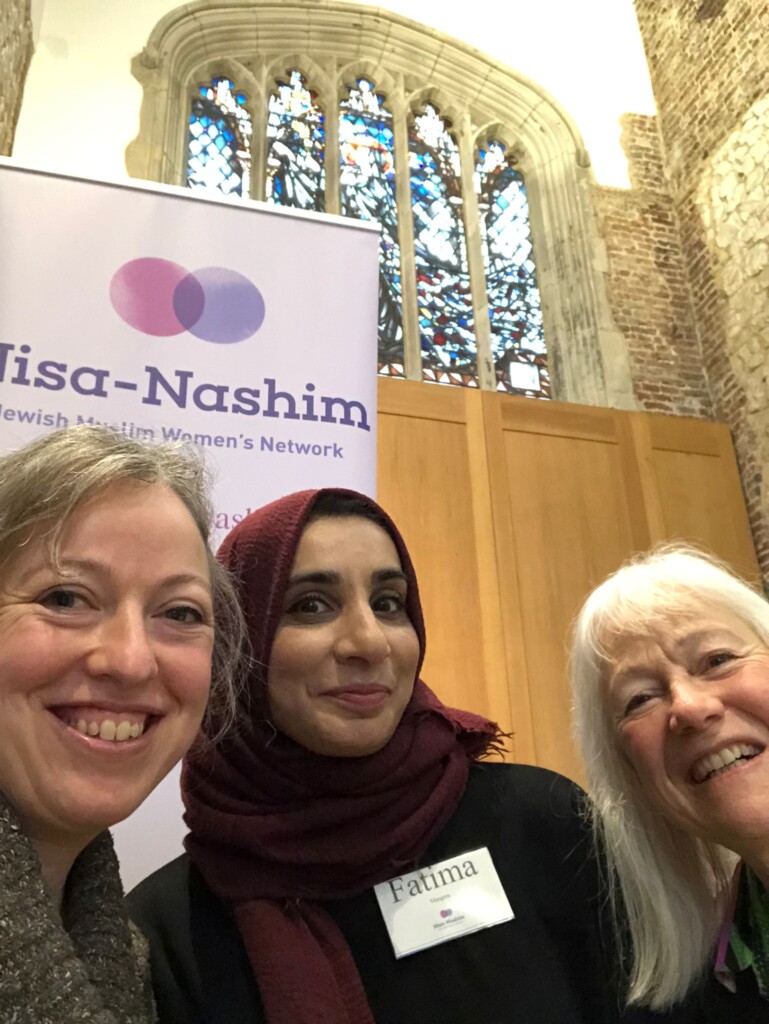 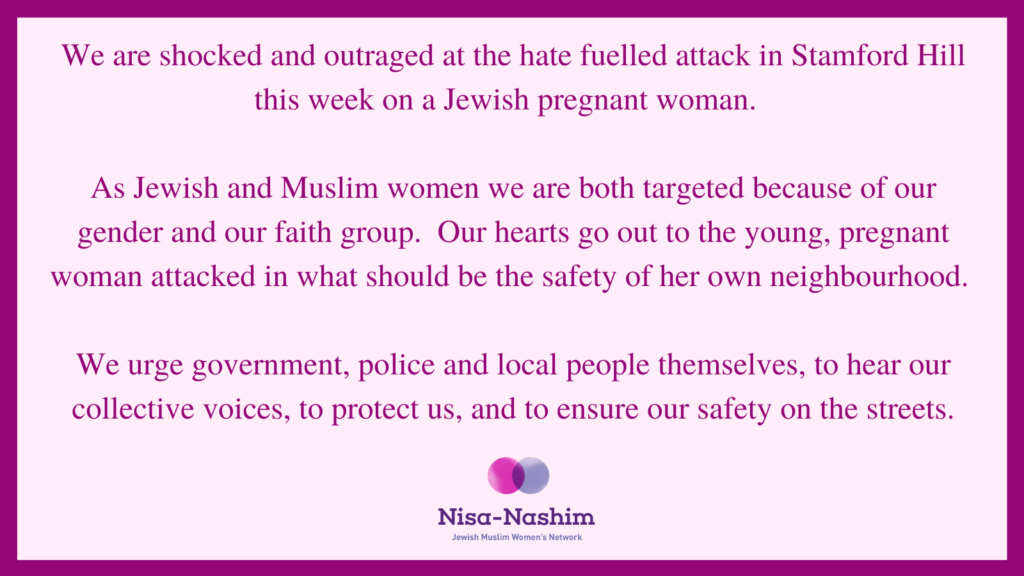 Nisa-Nashim were thrilled to be able to host an interview with Lauren Manning, a former member of the Neo-nazi white supremacist group Blood and Honour. Lauren spoke about her struggle to leave the group and how she now dedicates her time to helping others break away from such a destructive lifestyle.

Jemma from Hope not Hate joined us as well and introduced us to the world of the Far Right. Check out the recording if you would like to listen to this fascinating story!

Laure Manning spoke about her remarkable transformation from a convinced white supremacist to a supporter of Jewish and Muslim women and this very fascinating story attracted a lot of media attention.

Check out some of the articles: 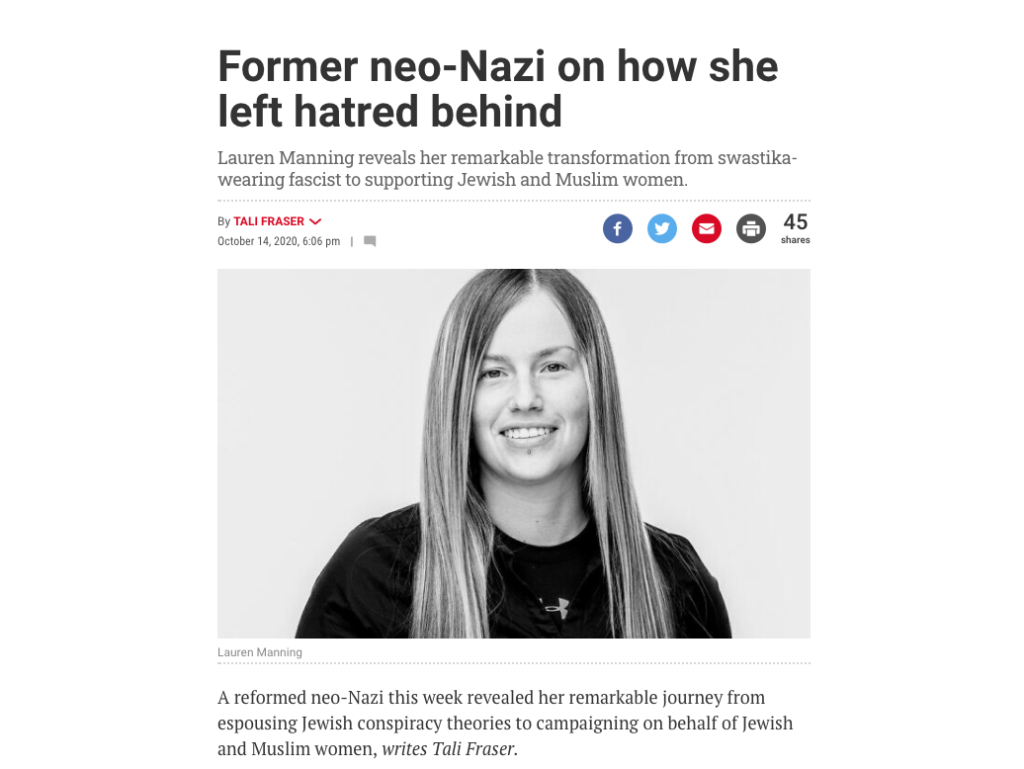 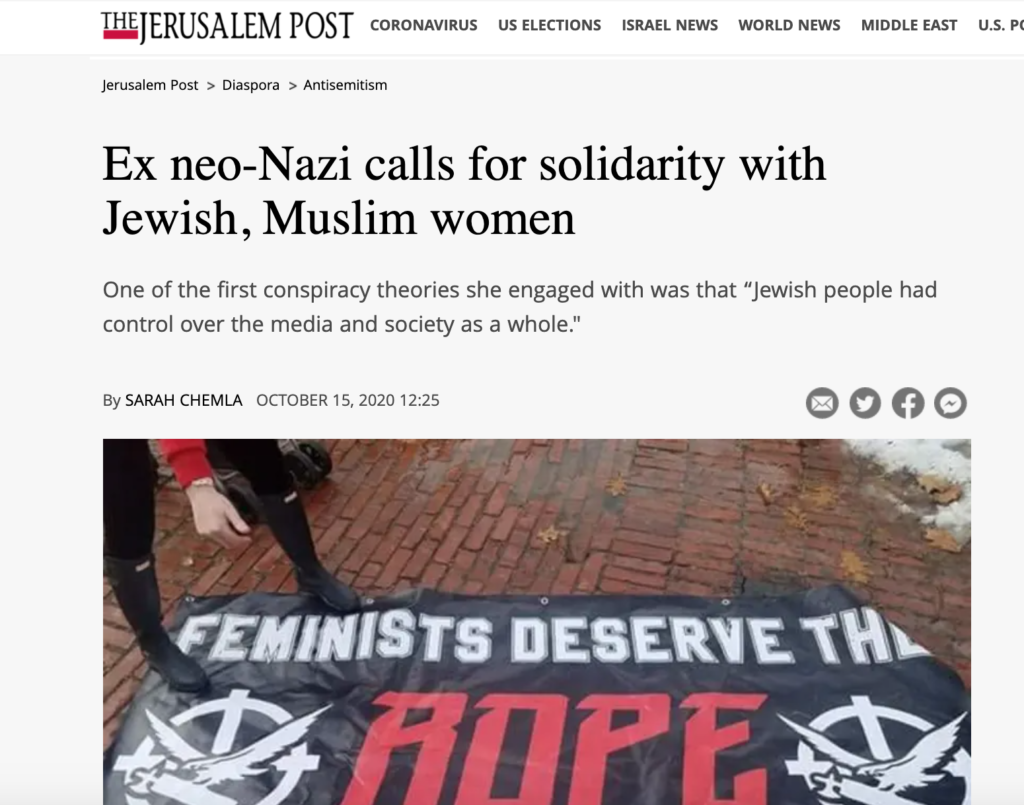 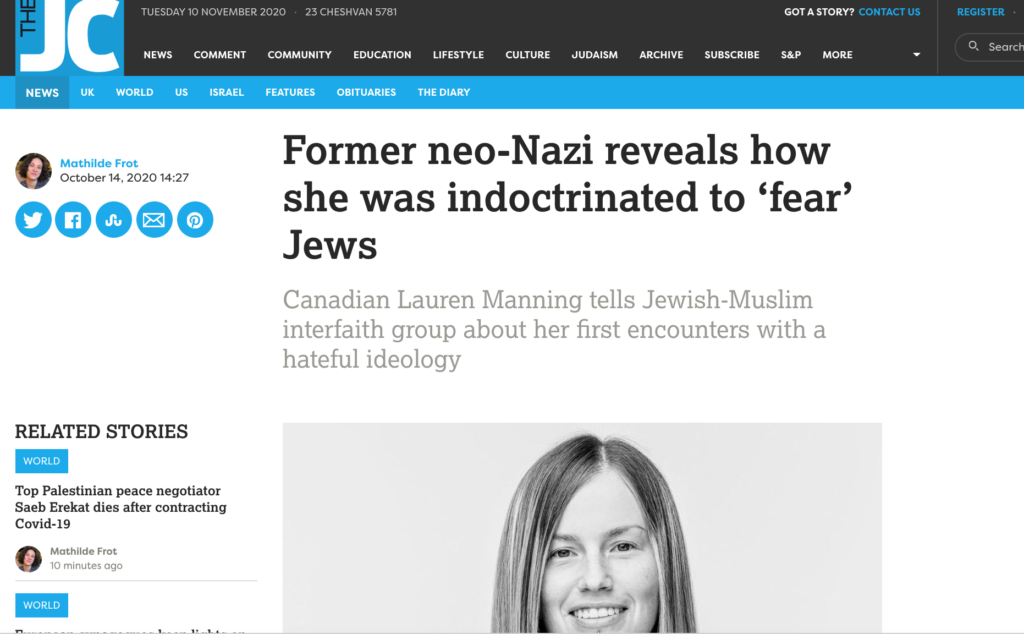 A play by Lenna, from the Nisa-Nashim teachers’ group

We are really excited to let you know that Lenna, the co-chair of our teachers’ […]

After the dismal attack on Yom Kippur in the Halle Synagogue, Germany, Nisa-Nashim Muslim sisters […]

Following a few incidents involving hate crimes on public transport, we decided it was time to act..

Following a few incidents involving hate crimes on public transport in 2018, we wrote to the Department for Transport requesting a meeting and, although it took time for it to be agreed, it did take place last week in London.

We took time to get feedback and thoughts from our networks because we wanted to represent them well and use real examples when speaking.

The meeting was attended by representatives from the CST, Tell Mama and the Sikh Council.

Sikhs, Muslims and Jews are known to be visible on transport and therefore vulnerable to physical and verbal attacks.

We were hosted by the Department for Transport with representatives from the British Transport Police, Transport for London, the Metropolitan Police, the Home Office and the Ministry of Housing and Local Government.

The discussion was productive and we were able to give lots of feedback, thoughts and suggestions.

Women are particularly vulnerable and many of our respondents, particularly Muslim women, expressed how unsafe they sometimes feel on the Underground and will now stand back near the wall rather than near the yellow line for fear of being pushed onto the track. We were able to highlight how, in parts of North London, young Jewish students get verbally and sometimes physically abused going to and from school on the buses. We also expressed concern that some of what seem like fantastic schemes to raise awareness, provide reporting mechanisms and generally get public attention about hate crime on public transport – many of those schemes are not known enough by the wider public. The conversations were honest and productive and we are confident that our concerns and suggestions were taken on board and will be acted upon. They very much valued our insight from women in different communities.

One reassuring conversation after the meeting was with a person from TFL who made a point of coming to us and saying that three years ago we had been in a similar meeting and had given lots of feedback and suggestions for consideration then too.  He said that as a direct result of that meeting, many schemes and programmes had been put in place, particularly around community engagement and that had been a great success.

It was good to hear that our interventions then made a tangible impact and we are hopeful that this meeting will have provided useful information that they can use to implement necessary changes.

We will remain in touch with them and will work with all of the partners round the table to continue the dialogue and to share resources through our networks to raise awareness and reassure women in particular that their voices are not being ignored.

That the attack on Halle Synagogue, Germany was deliberately perpetrated on Yom Kippur, and by […]

Faith leaders representing religions including Christianity, Judaism, Islam and Baha’i were invited to attend  a […]

Nisa-Nashim’s annual conference in the news

Our annual conference attracted a lot of media attention. Here are a few of the […]